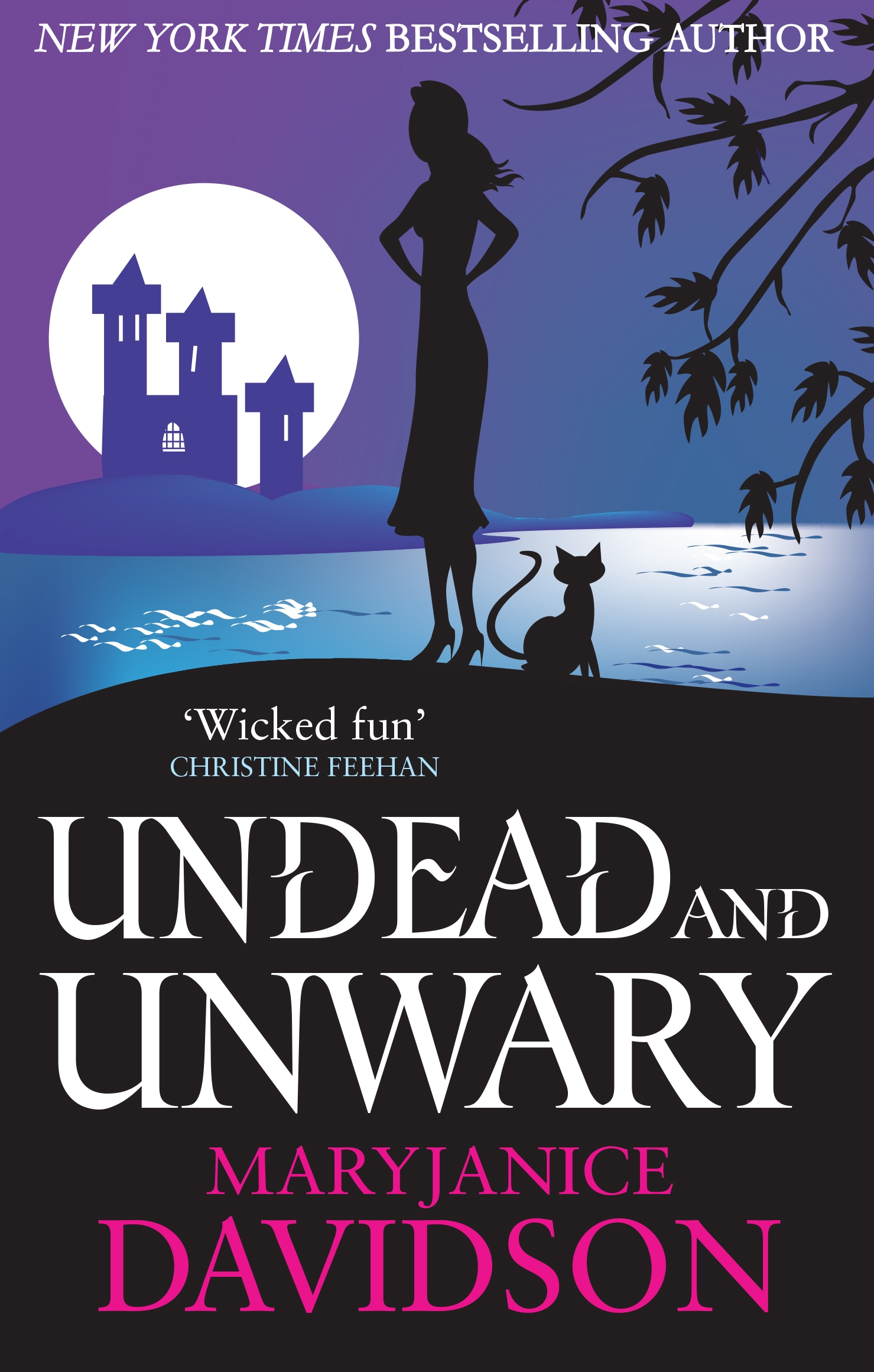 I AM A PROUD CUMBERBIMBO

I love England.  Great Britain, I mean.  Um, that place on the other side of the ocean that isn’t America.  No, not Australia.  (Though I think Australia’s terrific, too.)  I love it for reasons any sane, right-thinking individual loves it:  the Tudors (the actual family, not the Showtime show), high tea, low tea, universal health care, crisps, chips, the currency, the accents, their tolerance of Americans, Benedict Cumberbatch.

Yeah.  Benedict Cumberbatch.  Or, as we say in Minnesota, oofta.  Because the man is the sexiest weird-looking guy since Matt Smith.  (Mr. Smith has a box for a head.  I’m sorry.  You know it’s true.)

From the top of his thick, dyed dark hair (under which, he’s a natural redhead!  Zow!) to the bottom of his size whatever feet (who cares?  I’ve never been into feet.  I’m not sure he has feet), and everything in between, he’s weirdly hot.

And that neck.  At casual glance, it looks about twenty inches long.  (I’m a freakish six feet tall myself, and I write about vampires.  So I think about necks and legs.  And Benedict is 45% neck and 55% legs.)

And the voice.  Sweet Mother of God, the voice.  It’s been described as a jaguar trapped in a cello.  If anything, that’s underselling it.  Like Americans aren’t a sucker for a posh accent anyway?  (We are.  We’re accent whores.  It’s disgusting.  We’re disgusting.)  I’ve said it before and I’ll say it again:  oofta.  Gotta love a guy who plays a dragon, and they barely have to fiddle with his actual voice to make him sound like a sexy, smoky dragon.

Which reminds me, he even makes smoking look hot.  And it’s not!  Health issues

aside, the smell and the nicotine stains aside, the tiny burns all over various outfits aside, my dad smoked for thirty-some years.  No one grows up watching their dad smoke and thinks, “Day-amn!  That is hot!”  But Benedict pulls it off.

And the talent.  All of the above would be terrific on its own, but the guy has severe acting chops.  He’s like Gary Oldman; he sort of disappears into his roles.  He’s been Van Gogh and a dragon and a genetically manipulated warlord and Sherlock Holmes and Stephen Hawking and Frankenstein and Hamlet.  It’s a good thing I’ve got a crush on the man, or I’d probably want to kill him.  It’s pretty unfair; he’s the whole package.  The whole smoking long-legged talented deep-voiced redheaded package.

Even when he’s playing a complete douchelord (see:  Atonement, Star Trek) you can’t take your eyes off him.  Proof of my devotion:  I was into him waaay before the world suddenly decided he was delicious.  BBC’s Sherlock did it for me.  (Oh, man, did Sherlock do it for me.  Also I might obsessively read Sherlock fan fic.  Don’t judge.)  I essentially went from, “So many channels and nothing on, maybe I’ll bake something inst—oh my God who is that?”

After gorging on Sherlock’s first two seasons, and brownies, I started tracking down his body.  Of work, I mean, his body of work.  (Awesome thing #232 about being a writer: this counts as research.  It counts as work, even!)  Atonement, Tinker Tailor Soldier Spy, Amazing Grace, etc., a lovely list of “work”, all laid out nice and neat thanks to the good people at Wikipedia.

Then, the most wonderful news of my life (after “It’s a girl!” in 1995 and “It’s a boy!” in 1999, and “The bakery’s going to be open on Sundays now!” in 2011), my man Cumberbatch was going to be in Star Trek: Into Darkness.  And he was glorious, as I knew he would be.  The bulk!  The brain!  The lone tear tracking down a sculpted cheek as he talked about losing his people!  The bulk!  The trash-talking of Spock!  Listen:  I’ve been a Trekkie for decades.  My husband and I used to call in sick so we could see the earliest show whenever a new movie was out, that’s the measure of our geekiness, but if there were any characters besides Khan in Into Darkness, I didn’t notice.  (There was a captain, I guess, and that woman from The Losers, and the guy from Sean of the Dead, maybe?  Who cares.)

All this to say, I’m crushing on a man I’ve never met.  So much so that I dedicated my latest book, Undead and Unwary, to the magnificent son of a bitch.  (My husband is a very understanding man, to wit:  “Hey, if you think you can get him, go for it.  Maybe come back in time for our son’s graduation?”)  Why?  Because I have the best job in the world:  writing stories about fantastic things happening to ordinary people.  Because I’m lucky enough to have readers all over the world, and am determined to share with them the joys and sorrows of being a Cumberbimbo.  And because whenever a settled forty-something wife and mother feel like a teenager again, it’s worth noting, not least because reminders that unexpected thrills lurk are never a bad thing.

Undead and Unwary is out now on Entice! Benedict Cumberbatch is out now somewhere in the world! GO FIND BOTH! 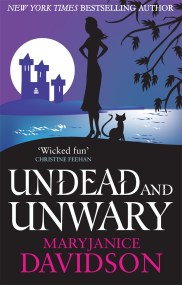 First: kill Satan. Second: reorganize Hell. Sounded simple enough back then, but for Betsy Taylor, managing "down below" isn't as easy as she'd hoped - even if she is doing it with her sister, Laura, a bona-fide Antichrist. So yes, Betsy has been shirking her hellish responsibilities, but she's been just so darn busy these days. And she's not just yanking Laura's chain. There's a brand new baby drama involving a pair of uncanny (ok, terrifying) toddler twins, an upcoming birthday party that has to be planned, and, are you ready for it? Betsy's dad - once so very dead - has been spotted in downtown St. Paul.

Now, despite all the chaos, Betsy's friends rally around, helping her to handle all this fire and brimstone jazz. As for Betsy's sister and dad - they have their own surprises in store for the vampire queen. And jolt by jolt, Betsy will discover that there's nothing as heartwarming as family. Yeah, like Hell.

If you love Darynda Jones and Janet Evanovich, this is the rip-roaring, devilishly funny adventure for you! 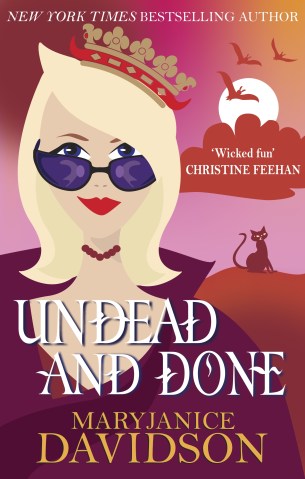 MaryJanice Davidson’s Top Five What The *!@#? Moments from the Undead Series 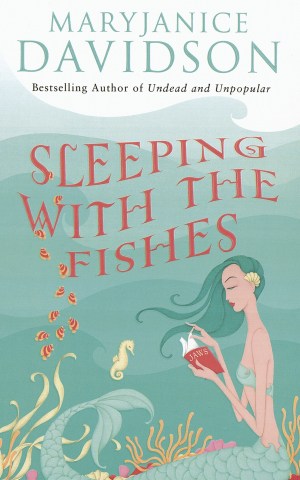